From the Easysound page, it’s possible to control and monitor almost every aspect of the Imagestore’s powerful audio mixing engine. A mimic diagram shows the flow of audio through the mixer system, and tallies give continuous feedback of the current state of the mixers and voiceover inserters.

To use the Audio control features of Commander-IS, the Imagestore must be using the ‘new audio model’, introduced in software version V2.09. Currently, Commander-IS only works with the ‘AB mix with single voiceover’ mode. The dual full-group voiceover mode is not supported. 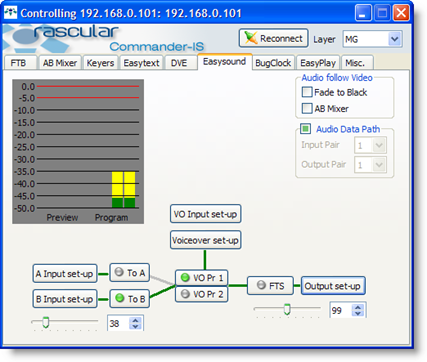 Most of the controls are self-explanatory. The A, B and VO input setup buttons call up dialogs showing the current configured state, and allow changes to be made on pairs, individual channels, or the entire group. The Voiceover Set-up dialog allows duck and preset levels to be adjusted, while the output setup menu allows final output gains and embedding to be controlled.

The AB mixer is typically controlled using the To A and To B buttons. The LEDs and mimic diagram show the contributing audio paths.

Each pair of the voiceover can be controlled independently, effectively allowing the unit to provide two stereo voiceovers in place of one full group.

Audio-Follow-Video can be selected independently for the AB mixer and the Fade-to-Black sections.

A, B and Voiceover Input Setup 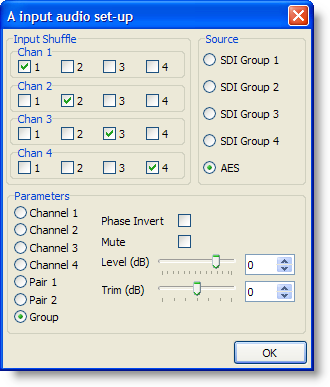 This dialog allows control of the input shuffling, audio de-embedding and other parameters for the selected input.

When it is opened, the Imagestore’s current settings are read and displayed.

Note: The input shuffle state cannot yet be read from Imagestore. The shuffle state will be shown as undefined until the operator adjusts it.

When you have selected a pair or a group, then the values shown are those of the lowest numbered channel within the selection. 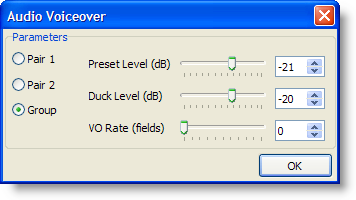 This dialog controls the duck and preset levels, and fade-rates associated with voiceovers. As for inputs, these can be set for each pair independently, or for the entire group. 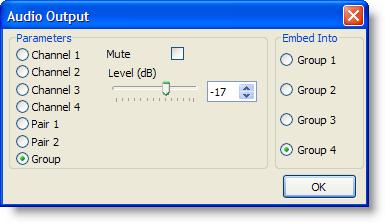 This dialog controls the output levels and mutes, along with audio embedding. As for inputs, levels and mutes can be set for each pair independently, or for the entire group.

When you have selected a pair or a group, then the values shown are those of the lowest numbered channel within the selection.